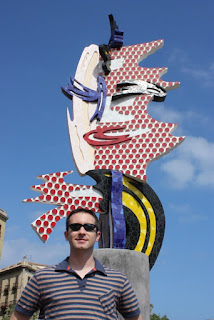 We had a bit of a confusing time figuring out Barcelona. When we scheduled the trip we intentionally took a late Saturday flight after reading about how the Barcelona evening doesn't start until late. Dinner not before 9pm with activities going well into the morning hours.

Our flight arrived at 9:30pm so after getting to the hotel to check in that put us out and about around 11:30pm looking for dinner. We walked and walked but couldn't find anybody eating dinner other than the tourists at the overpriced tapas restaurants. We DID find a whole bunch of restaurants but no one was eating! Now tired, hungry and frustrated, we finally stumbled on a great little Italian place (we're in Spain, we know) which made seriously good brick oven pizza. After having my share of pizzas in Italy I can say it was mighty good.

The next morning we decided to tour around the Gothic area and hit the Picasso museum. Barcelona is a rather large city but if you are only concentrating on pieces of it at a time, it is very walkable...or so we thought (more on that later). The Gothic area was very neat - old buildings, art markets, narrow cobbled streets where we found the museum. It was started during Picasso's lifetime by a good friend who donated his own private collection of Picasso's works; it was further enhanced when the artist himself donated thousands more pieces from his own collection. (Thousands includes many sketches, drawings and unfinished pieces as well). It was fascinating to watch the progression of his work - from very naturalistic to his ultimate cubism. His copy of Velázquez's Las Meninas was intriguing. Taking such a famous, naturalistic painting and turning it in to another fascinating, but completely different version of itself.

The museum had at least a half dozen versions of his "copy" and many of his sketches and practice paintings - you could see the progression of the different elements of the picture come together in what was the "final" picture - the largest one. Although that picture was amazing, we ended up leaving the gift shop with a copy of one of his Los Pichones paintings - pigeons! Yeah, we loathe pigeons - they are dirty, annoying little birds but they are every where we go in Europe so in a way they are a true travel mascot and his paintings made us realize we do have a bit of a soft spot for them.

The rest of the afternoon we ended up strolling the streets of Barcelona eventually winding our way down to the port and beach where we ran across the Barcelona Head in the picture above. Funny enough it was created by American pop artist Roy Lichtenstein.

Finding dinner the second time around was much easier - we realized that although dinner doesn't start til 9:30ish, everyone does eat then and eats quickly - most food was out of site by 11pm. We found a great outdoor modern tapas bar - our food came out and it looked nothing like we thought we ordered (steak for Steph and fish for Josh). Steph's was paper thin slices of a tartar looking steak with a pile of rocket and cheese shavings in the center. Josh's fish came out in a cylinder shaped stack on his plate (not the fillet we were expecting). But the steak was tasty with a great balsamic drizzle and the fish was in the cylinder somewhere intermingled with pastry and a creamy sauce also accompanied by a balsamic drizzle. All that with a lightly chilled local Spanish Rioja - what a meal!

We called it a night after dinner as we were looking forward to an early start the next day to see La Sagrada Familia - Gaudi's greatest vision (I say vision as it was, and still is, a long way from being completed...more on that later).
Posted by Unknown at 7:08 AM