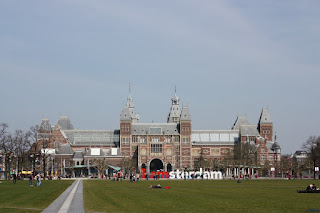 After a short flight and a quick train we arrived in Amsterdam city center at the Amsterdam Centraal railway station.

The first thing you notice when you walk out is how many bicycles are at the station. They have special bike parking garages, for lack of a better term. Other than bicycles, trams are the easiest way to get around. There is a metro (subway) system in certain areas of town but it is not best for touring.

To start we headed to the flower market to see what is was like on a Saturday morning. As you learn with a little time in the city Tulips are the name of the game in Amsterdam and for that matter, the Netherlands. Some huge percent of the world's tulip bulbs come from the Netherlands.

The market was situated on one of the many canals and most of the flower booths were permanently floating. You could buy many types of plants and flowers but the tulip bulb dominates the displays and I'm sure the sales. We were going to ship some home but evidently Uncle Sam only allows tulip imports in October. Strange. Oh and you can't ship this either...

We then made our way over to one of the busy squares for lunch but found too many tourist prices and opted for Burger King. I know... (Side note - Amsterdam has a surprising population of Mexican restaurants! Not sure how or why, but that excited us temporarily until we noticed it was about 11 euros for tacos and no free chips and salsa - no thanks!)

After our dose of calories for the day we made our way over to the Anne Frank House where we found a huge line and decided to pass until the next day instead finding a quiet side canal and street for a bit of photography practice with the new camera.

Next we decided to stop and have a traditional Dutch pancake at the famous Pancake Bakery. A quick tip if you are not wanting a full meal you can easily split one pancake for 2 people as we did.

First, you choose between savory and sweet. So for us it's easily the sweet variety. Then you choose what you want on it and we opted for apples, cinnamon ice cream, powered sugar and whipped cream. The apples were even baked into the pancake. If that's not sweet enough they even have huge vats of syrup on the table. Here's the final product.

To wind up the day we decided on a late evening Red Light District Exposed tour. Eye opening just doesn't express it because you know it exists and have heard about it but to see and hear about the everyday entrepreneurial life of the girls...that was truly fascinating. You start out by learning about how the district came about and how it evolved over the years; you also see the "high end" areas, the coffee shops, shows and stop to take photos in the one allowed area.

Still to come, the Keukenhof Gardens...
Posted by Unknown at 5:03 AM