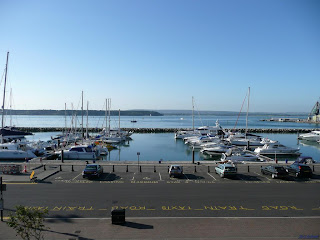 Last year for our first anniversary we decided that we would rather travel than exchange presents for our anniversary. As another condition, we added that we would take turns planning the trip and it would be a surprise for the other person. Last year, Josh planned an exciting weekend. This year it was my turn.

The surprise destination was Poole, England, situated on the world's second largest natural harbour. A quaint town with a lot of pizazz, there was fun to be had. Our room overlooked the harbour and we were located on The Quay (pronounced: key) - the main road running along the harbour where all sorts of stores and restaurants were located. We yet again lucked out with amazing weather and decided to take part in some of the many water activities offered around Poole harbour. We hired a RIB (rigid inflatable boat) to take us on the tour of the harbour the proper way. It was a nice peaceful ride and then heading out to the Old Harry Rocks, the driver let loose and we held on for dear life as we bounced across the wake of a huge ferry! Awesome!

We spent the rest of the afternoon hanging out on the Sandbanks Beach where there was a windsurfing completion going on. Unfortunately there wasn't any wind so instead we watched speed boats and some water skiing stunts. Who'd think we be chillin' (literally) on the beach in September in England?! It was nice, but a tad cold for our tastes (around 70 degrees F and windy on the beach) to be in swim kit.

Saturday night we got to enjoy a parade put on as part of the Inside Out Festival, an arts festival. It was essentially a night parade exhibiting an underwater fantasy world with some kickin' music. Pretty cool.

To cap off the weekend, I surprised....well, tried to surprise Josh (he opened the mail when I told him not to and found our tickets) with Zorbing. A sport invented in New Zealand, consisting of rolling down a hill in a big bubble!

Up to two people can ride in one Zorb and you can chose from being harnessed in the bubble or just sitting inside with a nice amount of water so you slosh all the way down! I chose the water! You can have take a running jump to jump through this narrow hole in the Zorb to get inside (Josh had to push me in...I didn't take a very good running jump)! Then sitting inside the guy sticks he head in and says ok, I'm gonna zip you up...stand up and start walking down the hill - what walking down the hill?! Yep, he said, you'll fall eventually, but you have to start walking to get going. Josh was rearing to go and we started walking...

I quickly hit the floor and then Josh joined me as we slide and tumbled over each other the entire way down! It was awesome!! Then to get out of the Zorb through that narrow hole the guy said its easier to come out head first so you reach out hands and head first to catch yourself on the ground! All in all, it was great and we'd do it again in a heartbeat! Here we are after changing into dry clothes.

All of the Poole photos