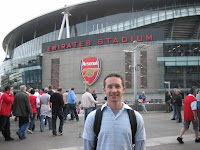 After having lunch in London on Sunday we were in the tube stations riding over to Leicester Square. With the Premiership winding down I asked a bloke wearing an Arsenal jersey in passing what time the Arsenal played. He said "four o'clock". It was still an hour before kick off and they were playing a cross town rival Chelsea. As we continued down the escalator towards the train we noticed more and more Arsenal jerseys heading towards the game. I grabbed our London A-Z guide (which I highly recommend) and we were only a few stops away from the stadium. How lucky is this and its Arsenal v Chelsea...

The closer we got to the stadium (Emirates Stadium which opened in 2006) the more and more Arsenal supporters that filled the train. When we hoped off the tube at the Arsenal stop and the train emptied. Everyone was going to the game so we just followed the crowd. Above ground people were everywhere yelling and chanting. The streets were closed off to autos and packed with people. It was a big migration of Arsenal fans towards the stadium. The atmosphere was phenomenal!

Now my attention turned to tickets so I asked another bloke selling merchandise where I could score some tickets. He said "Tickets" with a laugh, "If you could even find tickets they would cost you a minimum of 250 pounds." Needless to say we didn't get into the game but it was well worth the trip.

I did take a few pictures of the stadium but I was so enthralled by the surroundings I didn't get many. However I was able to take short video which I filmed just after kick off outside the stadium that tries to capture the environment inside the stadium. The video isn't all that great but the sound is. Listen to the chanting from where we were standing it was crystal clear. As I was saying the atmosphere was incredible. I will be back!

Oh and we did see the match but from inside a pub. Pints around.