A quick hop over to Ireland...ha! 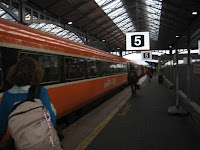 Getting to Ireland this weekend was our first attempt flying with a low cost airline. We chose Ryanair who has dirt cheap airfare to many places throughout Europe and if you book in advance you can get actually get a 1 pence fare (plus tax of course). Anyway our first destination in Ireland was Cork. When we booked our flights it was much cheaper to book 2 separate flights; one from London to Dublin then another from Dublin to Cork. Our layover time in Dublin was a little over an hour which should be plenty of time, right?

Now we are just hoping that we can do this re-check-in in an hour. Oh, I almost forgot to mention that Ryanair closes the check in desk 40 minutes before the flight. Nice planning on my part...

Once we get in the terminal we see our first flight is delayed. Nice. Needless to say we didn't make the next flight even though we ran through the airport dodging all of the other tourists. The check in for our Cork flight was already closed. You also should know that when using Ryanair if you miss a flight they charge you a hefty fee to switch to another flight and they accept no responsibility for the second missed flight as they are unrelated bookings...ouch. Plus, the next flight to Cork is not for 3 hours...

At this point you need to remember that we are in Ireland and on Ireland time which is slow. Options?...what other options do we have? We found out there was a train in an hour and was the last train of the day. The Dublin airport is on the outskirts of the town and a 45 minute bus ride to the train station. We scrambled to get on the right bus and get to the station.

We caught the train with a few minutes to spare and are home free now, right? About 2 hours into the 3 hour train ride we are awoken (both of us snoozing on the train because we are exhausted) by a woman saying "SMOKE!". Our train car is filled with smoke. Cough.

Turns out it was a small electrical fire and evidently not a problem in Ireland because the train never stopped. They just had us all move over to the next rail car. We finally made it to Cork 3 hours late at midnight. After a short cab ride we crashed for the night at the hotel.

Yikes what a day. More on Ireland later...
Posted by Unknown at 2:42 PM