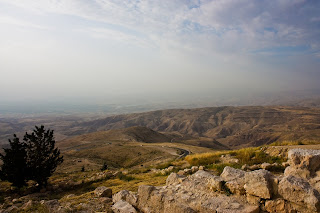 So with our (slightly) late departure from the Dead Sea, we were really pushing it for time to get to Mt. Nebo before the park closed. Luckily, you can grease the wheels to make things happen in your favor around these parts. Needles to say, we were granted entry into the park.

One thing about this part of the world, the Holy Land, is that everywhere you turn, biblical history surrounds you. From Mt Sinai and the burning bush, to the Jordan River where Joshua led his people across to Jericho (which we could see from the drive), to Mt. Nebo where Moses is believed to be buried - it’s everywhere! And that’s only the beginning.  Jerusalem was just across the Dead Sea. I mean who’d of thought I be this close to where the walls came down in Jericho, something I remember learning about as a kid?!

Now back to Mt. Nebo. Since it was roughly closing time we had a rushed visit. From this high vantage point, you get a splendid panorama view of the Holy Land. You also get a look at interesting artifacts including some 4th century mosaics and a huge rolling stone that was used as a fortified door back in the day. Wow!

With a swift exit, we were heading back down the mountain towards Madaba for the last days of the trip.
Posted by Unknown at 9:24 AM