The Joys of Holiday Travel 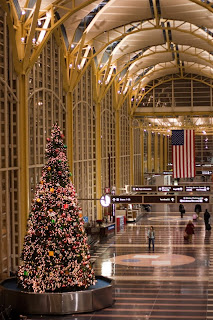 For the last 2 years we were lucky enough to have a direct flight home from London Gatwick to Cincinnati without delay or hassle. For some reason this route was canceled which left us without any direct flight options.  Considering winter weather could be a problem in December, we decided to fly through Europe instead of the US east coast to avoid this as much as possible. We choose Paris because it was the shortest total travel time and seemed unlikely to have weather issues early in the season (as compared to layovers in Chicago).

Well our plan back fired. It snowed in Paris and London the days leading up to our flight - both being cities that don't see that much snow.  In a taxi at 4am London time the journey began through the snow dusted roads in the UK. At the airport we learned our flight to Pairs was 2 hours delayed due to delays on the aircraft arriving late from Paris; the other 3 flights to Paris that morning were canceled! With only an hour layover we crossed our fingers and hoped that our next flight from Paris to Cincinnati would have delays too.

Arriving in Pairs we found out our next flight was delayed by using Josh's blackberry, but we were not sure if it was delayed enough for us to still catch it. In the chaos of everyone on the flight trying to find out if their connecting flights were still around, Steph queued up in long line to talk to an Air France representative and I took off to get to the other terminal where our flight was supposed to depart. While Steph was in the queue, one rep happen to walk by with a clipboard and a walkie talkie and several passengers started asking if the Cinci flight had left. She simply advised us to go to the gate and Steph simply reminded her that it was a simple question: is the flight still here or not?! After a brief walkie talkie call to the other terminal she confirmed that it had in fact departed.  Ugh.  Next stop, the Air France customer service line.  Below is a picture I took in Paris switching terminals on the bus.  You can see the snow that caused all the delays! 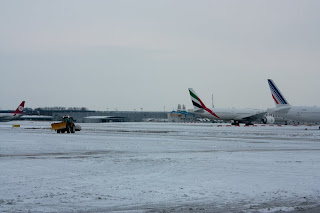 Four hours later we learned there were no more flights to Cincinnati until the same flight the next day so we opted to get as close to home as we could, i.e. we wanted a flight to the US TODAY.  So, we took the option of a flight to Washington DC with a connecting flight to Cincinnati at 6am the next morning.  As you would expect this flight was delayed as well (about 4 hours) but we had all day to get to DC.

The Air France flight was smooth and they served some surprisingly good airplane food.  I guess being French we should have expected no less.  They even offered and aperitif before dinner.  Steph thoroughly enjoyed the salmon, tomato and cucumber starter.  Yum!

Landing in DC it was right at midnight local time and snowing heavily.  As we made our way through passport control, an officer informed us that flights were already being canceled for tomorrow morning. She welcomed us back to the States and wished us luck. We picked up our bags and worringly checked the status of our morning flight.  Canceled!  Although it wasn't a stretch to imagine why.  Lots of snow already on the ground and 15-20 inches ( 38 - 50 cm ) in the forecast.

Now it gets interesting.  In DC we had to fly out of the other airport across town; we landed at Dulles from Paris, but the next flight was out of Reagan.  We wandered the airport for an hour or so trying to find an Air France rep, calling car companies to get quotes and considering other options. It took a couple hours to get a taxi as they were few and far between but we piled in with another guy who was making the same journey from London to Cincinnati but who had started in Uganda 2 days prior.  In the taxi, despite the treacherous road conditions, our taxi driver refused to take it easy.  He was honking at snow plows and driving like a maniac in and out of traffic.  Now I appreciate the effort but I'd rather not get into a traffic accident to save 10 minutes of taxi fare which is almost what happened.  In one last right hand bend before our exit on the interstate he lost control of the vehicle which started heading straight towards the center divider.  At the last moment he some how recovered and steered us away saying, "the roads are so bad, I have no control".  Funny that, SLOW DOWN IDIOT!

It was now 3:30am on Saturday...a full 24 hours after we started our journey.  In the airport we found a spot and settled down until someone from the airline staff appeared.  We weren't lonely in the airport at 3:30am - it was apparent that many other travelers were in our same situation and people were camping out and snoozing in every nook and cranny. A Delta rep finally showed up around 4:30am, where we learned that all flights for the day had been cancelled and most likely the following day morning flights would be as well.  Our first option to leave would be late evening flight on Sunday; we took it since we had no other options.  After that was a waiting game so we booked a hotel room.  One airport shuttle and a room service lunch later we called it a day at 2pm.  We slept until around 11pm on Saturday night when I woke up and was hungry again.  The McDonald's next door was the only thing open so after some burgers and fries we were back to sleep in no time.

On Sunday morning, after many phone calls to the airline we had some hope that the flight would leave so we headed to the airport in the early afternoon. Standing in a line that took up every square inch of space inside the airport we once again found out that our flight was canceled. The airline representatives came around and told everybody that if they did not have a confirmed seat on a non-canceled flight then they should go home and call the airline. This included us but we couldn't go home. Finding the nearest pay phone the airline said our next available flight home would be in 6 days time after Christmas on December 26th! As I said to the representative, "You are joking, right?!". Stunned beyond all belief we stood there dazed before realizing the only way we were getting home was to drive ourselves.

While I booked a rental car online (thank goodness the airport had free wireless), Steph called to inquire about a refund possibility from the airline they had mentioned on a previous call.  She told our story about not getting home until Dec 26th and referred to the refund possibility. Without asking any questions, the rep said ok and put Steph on hold. As we were holding it dawned on us both..."she'll only cancel this leg of the flight, right?" She came back to the phone and said "ok, all refunded for you." When Steph questioned whether she had canceled the whole ticket, she said yes! In a tense few minutes Steph had to explain that OF COURSE we do want to get back to our original location - WE NEED THE OTHER HALF OF THE TICKET! But when she went to re-book our seats, the seats were already snatched up and she transferred me to someone else to re-book on another flight without first explaining the situation to the new person. After explaining our story yet again, we finally got a return flight booked. At this point we were literally exhausted yet running on adrenaline at the same time.

We made our way over to the car pickup point and were very thankful for a excellent young man working the counter by himself - we was still cheerful and helpful despite being slammed. Gotta love American service! Finally in the car at 6pm on Sunday evening, armed with a sat nav, we hit the roads.


The roads were all clear, just wet, and we passed several salt trucks still at work. But there was no lack of snow! See the picture of a picnic table at a rest stop in West Virginia. We got to Charleston and decided to just keep going - we were so anxious to get home. At 4am on Monday morning, we pulled up to my parent's house and both went running to the door and were greeted by my mom, swinging open the doors and giving hugs.  Apparently, my mom had been awake on the couch and saw the car lights and thought it had to be us - and she was right.

After a trip like that, we had never been so happy to be home for the holidays!
Posted by Unknown at 5:25 PM