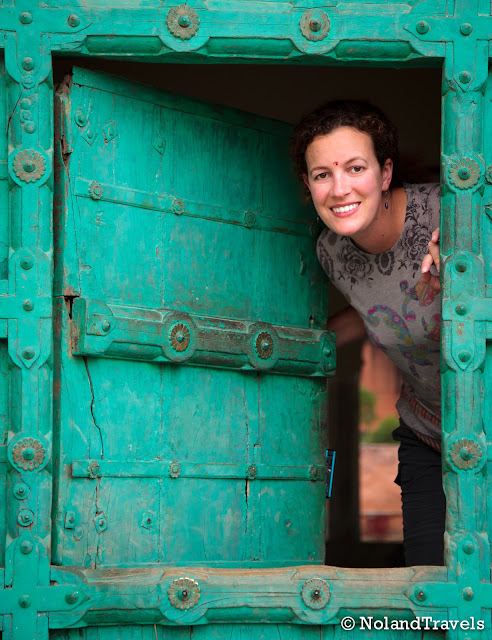 After having just been overwhelmed by the beauty that is the Taj Mahal and being avid (amater) photographers, we discussed getting up early the next day to capture the Taj at sunrise from across the river.  Ben and I were quite keen; the girls...not so much.  We ultimately didn't go because the weather was poor and we knew the view from across the river wouldn't be what we imagined in our minds - the clouds, fog and pollution haze was just too much that day.  Not too mention that after the madness of the trip so far, a break from the hustle and bustle (and super early mornings) was hard to pass up. 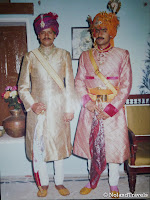 Our next stop was to be a small village called Tordi Garh where we were to stay with the Prince of the town in his palace.  We didn't know much about the village or what we would do other than knowing it was often called "the highlight of the trip".  So, with that in mind we set off on an early 4-hour public bus ride.  These type of rides make for prime people (and animal) watching, for instance....

...cow pat "farms" - because the cow is sacred, so is the dung, hence they slap cow pats against stone and brick walls, with clear hand prints in them, to dry.  The dried discs are then sold and kept in homes for good luck and well being.

...India is a beautiful country but the over-population and limited infrastructure in some areas takes its toll.  We saw rivers beds that actually looked like a river of garbage, with no water in sight.  These river beds though were a source of food and sustenance for the roaming cows and pigs.  "The pollution is bad" is a strange paradox here.  Say there was no drifting garbage then how would the cows, pigs and other roaming animals survive?  Could the people afford to feed them?  I don't know.  It's a strange sight for our eyes but in this "ecosystem" it does have a balance...

...a wood workers' shop.  With several men outside cutting, sanding, nailing, etc - building pieces of furniture from what looked line pine or another light wood.  Their full line of fresh wood furniture was out on display - tables, chairs, cabinets and more!  No telling how many local homes were fitted out with their pieces.  Amazing to see. 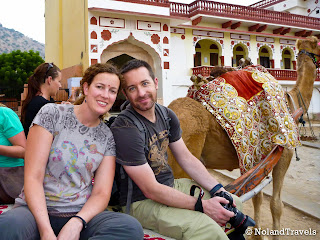 The remainder of the bus ride was equally as interesting but soon came to an end when we had to transfer to 4x4 vehicles for the "rough part of the trip".  Bad roads, old vehicles, very little seat cushioning = a very rattled body after 3 hours!

On arrival in Tordi, tired from bouncing around in jeeps, we were greeted with a refreshing lemon drink, a red dot on the forehead and a marigold necklace before being ushered into the welcome room through 2 huge green doors.  The palace was a large complex of buildings, a significant portion of which had been converted in to guest quarters.  Then we found out our afternoon would commence with a camel safari to the sand dines but first we needed to find our room and drop our bags.

The Prince's palace is officially referred to Tordi Garh. Somehow we didn't get home with a good photo of the palace so you will have to check the website to get a better idea, although you can partially see it in the background above.  So far on this trip Steph and I have seen our share of simple preferential treatment. Throughout the trip we've been managing to get the best rooms (or rooms without any problems like open sewer pipes or fans falling from the ceiling) or being upgraded to a better train car.  Maybe it helps that the guide and I get along well!  Anyway, here in Tordi our room was no different - it was quite possibly the best!  All of the rooms had eccentric qualities and style but ours had a separate living room with a shrine to Shiva and had lots of family photos on the walls of the Prince from his sister's wedding.  Our bedroom was equally as large.  Outside our room, we had 2 small chicken coops complete with mother and a handful of chicks.  Awesome! 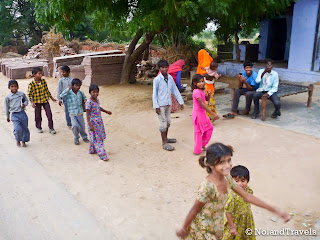 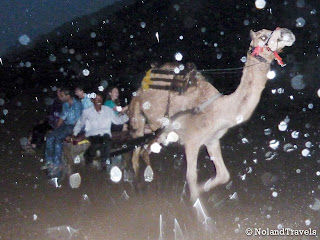 With settling in out of the way, it was time for a camel safari to climb some sand dunes.  We boarded our big old fashion carts pulled by camels and headed off through the village.  It didn't take long for the local kids to know we were around and our ride consisted of our carts being chased by loads of their smiling faces.  Outside the village, we found the sand dunes which are overlooked by the old medieval fortress on top of the rocky hill.  After climbing the sand dune we were served tea (the sweet milky variety - nice touch!) where we relaxed in preparation for sunset.  However, the weather would have no part in a relaxing evening.

Off in the distance we were noticing some dark clouds coming our way.  You guessed it, some time later the thunder clouds moved in and instead of sunset we got a lightning show before it started to lightly rain.  As the lightning moved closer and the rain picked up, we all lost our nerve and were ready to head back (a combination of we were all carrying cameras, we were at a high point in lightning and there wasn't any form of shelter within 100 yards).  With the rain now coming in large watery drops, we were all running down the dunes back to the camels.  We were soaked by the time we got situated on our carts and with no cover and at least a 5 minute ride, it was only going to get worse!

At first we weren't too excited but then we realised there wasn't much we could do about it, the main camera was safe (hiding in the waterproof bag we just purchased before this trip - whew, good buy!), so we broke out the waterproof camera and just soaked up the experience - literally!  We were in India, on a camel, in a thunder storm, getting soaked, heading for the Prince's palace.  Oh and it was the first time in 8 years that it rained in Rajasthan in November, weird!

So you know those big trucks that India is famous for?  The ones all crazily decorated?  Well, on our ride back through the village, one pulled up behind our camel train.  I guess he could tell we were having fun as he turned on his external DJ system and gave us a good shot of Indian music with disco lights and all.  The proof is in this short video.  Truly wicked!


Back at the palace, not an inch of us dry, we used our living room to dry our clothes, bag and shoes because we were drenched! Thankfully, we had 2 ceiling fans and turning them on high had our clothes dry for the next day. 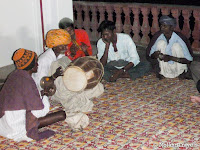 After the hectic and exciting camel safari, you wouldn't expect the night to get much more interesting but it did! Dinner was on the roof top terrace and since the rain had come and gone we were able to enjoy a traditional Indian meal set to local villagers playing traditional music.  Steph and I both even joined in playing the cymbals for a song - it was actually quite tough - they had a unique little rhythm going on!  All in all, it was a hectic but absolutely amazing day!  Welcome to Tordi!