Sitting in our living room...and we saw George W fly by 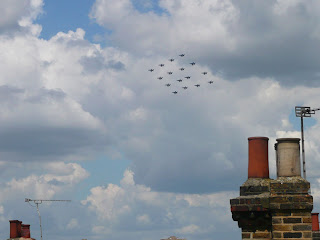 We were sitting in our living room and Josh had just sat down next to me with his sandwich and taken a huge bite, then he stands up and yells "it's George W!"

Apart from me being scared to pieces and thinking he's lost his marbles, "What", I said. But after both of us bolted to the window we were lucky enought to watch 2 minute or so entourage of airplanes that undoubtedly was carrying the President in for his arrival in the UK today. It was formation after formation of impressive jets and fighters. Two huge jets flanked by two fighters, then another similar formation, then a formation of 9(!) fighters in a diamond pattern, then two sets of huge jets flanked again by fighters, then a formation of 16(!) fighters in another diamond formation, then even more jets! My goodness when he rolls, he rolls in style!

One interesting note is that people in general not being happy that George is coming, those at Heathrow are even more upset because his arrival apparently (and understandably) causes major disruption to Heathrow flights.

Wow - well that was pretty much as neat as seeing him walk by on the street - and maybe even better because that was an impressive entourage of planes. Although, that's our tax dollars (and gas) being blown out the back of all those planes. Oh, wait, we aren't paying US taxes really at the moment...ok, its YOUR tax dollars! haha - thanks for the impressive show!

Here all of the photos. Josh was half hanging out the window so apologies for the poor quality.
Posted by Unknown at 8:05 AM