Watch out Britain - Steph's on the M25 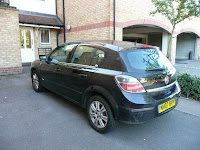 Yep, that's right...I am driving. I have officially been driving for 2 weeks now (I know, I really should have blogged about this sooner). However, if I had blogged about this the first day that I drove to my client site on the west side of London, then you all would have been getting a much different blog.

So, we picked up the rental car on a Sunday so that I could "practice" for Monday. Practice went well, although I had a white-knuckled grip on the steering wheel, and Bill Fisher was right in saying that it takes two people to drive in Britain! After studying the step-by-step map on Mapquest, I was ready - at least I thought I was!

I set out Monday morning with about 1 hr 45 minutes to get there. Mapquest said it would take 45 min (no traffic estimate though). As soon as I hit the M25, I understood why people hate it.

TRAFFIC. 4 lanes of speedy little cars and lorries all zooming in the same direction. Narrow lanes. Variable speed limits and speed cameras...let me explain that one. They are big on speed cameras. We hear that they are still using film versus being digital so theoretically, a freshly loaded speed camera will run out in about 10 minutes per the locals...but you never know. Hmm. Variable speed limits: they have these huge lighted signs across the motorway saying what the limit is, then there is a series of white dash lines after you drive under the sign that the camera uses to measure your speed. It doesn't sound all that bad, EXCEPT that these variable speed limit signs are about every half mile! And driving 30 miles around the M25, passing Heathrow airport in the process, the variable speed is super annoying. The one benefit is that they truly slow you down for an upcoming traffic standstill or wreck. The speed goes from 60 to 50 to 40 then, bam, sitting still.

I survived the variable speed signs but to make a long story short, Mapquest was wrong, who knows how to deal with a double roundabout and a phone call to ask directions is never out of line....I finally made it to the client site about 20 minutes late. I would not have had a positive blog at the end of that day! haha!

Since then, I have figured out how to get to the client site without getting lost and I have MASTERED the double roundabout! (Picture a figure 8 with cars moving all around you). Yes, I mastered that...without side-swiping someone.

After two weeks, I can confidently say that driving here is getting easier. I guess I need to read that Rules of the Road book that PwC sent me in my welcome package...that might explain some of those funny looking, colorful signs! haha!
Posted by Unknown at 2:27 PM